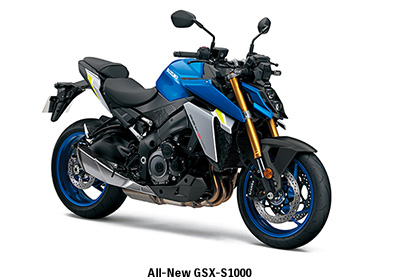 Suzuki Motor Corporation has made full model change of its street motorcycle, the GSX-S1000. The all-new model will be sold worldwide, and the initial delivery starts in Europe from June 2021.

The GSX-S1000 is a street fighter model with exciting acceleration and agile maneuverability, the essence of which is originated from the street-tuned engine and chassis of the supersport model GSX-R1000.
In this new update, the model inherits the high controllability and sport performance from the previous model, while adopting an aggressive and progressive styling design. It also has increased engine power output, engineered with the newly adopted electronic control system S.I.R.S. (Suzuki Intelligent Ride System), that allow riders to enjoy both ease of handling and sport riding.

The radical appearance of the all-new GSX-S1000 is characterized by the newly developed, vertically stacked pair of mono-focus type LED headlights, which has been adopted in production model for the first time in its motorcycle line-up. The beautiful and muscular look of the fuel tank design, emphasized by the sharp and edgy lines of the cowling express the aggressiveness, agility and intelligent features of the model.
The 999cm3 liquid-cooled in-line four engine, by adopting electronic throttle control systems and revised intake and exhaust mechanism, has now increased top-end output, while complying with the Euro5 emission standards (for European specification) which became mandatory for all-new motorcycles sold in Europe from 2020.
The newly-installed S.I.R.S. includes outstanding features, such as the Suzuki Drive Mode Selector (SDMS) with a selection among three different modes for various engine output characteristics, the updated Suzuki Traction Control System (STCS), now with a wider selection of 5-mode settings, and the Bi-directional Quick Shift System, which allows up or down shifting without clutch lever operation. These systems enable riders to optimize performance characteristics to best suit their level of confidence and experience as well as varying road surfaces. The all-new GSX-S1000 is engineered for the excitement of street fighter motorcycle riding, covering from aggressive sport riding to everyday usage.