Suzuki Motor Corporation has developed the world’s first* Micro-Plastic Collecting Device which can be installed on outboard motors.

Marine plastic waste has become a significant environmental issue in the recent years and a huge amount of such wastes that has not been gathered correctly flow into the ocean. They are then broken down into micro-plastic under the natural environment and their impact on the ecological system is also becoming a concern. To tackle these issues, we focused on the structure of the outboard motor, which pumps up tons of seawater to cool the engine and then returned to the ocean. We developed a collecting device which collects micro-plastic waste utilizing the returning water. Through this device, micro-plastic waste around the water surfaces can be collected just by running the boat.
The device can be installed to a return hose easily, and it does not affect the engine performance since it only utilizes the returning water that have already been used to cool the engine. According to the monitoring research conducted in Japan, micro-plastic waste was found within the substances collected through the filter. The research is also being conducted abroad and further improvements will be made.
We plan to introduce the device as an optional part from 2021 and incorporate it into the standard feature in the future. 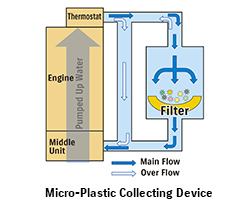 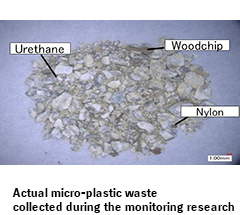 2020 is the 10th year of our continuous activities to clean the waterside.
As marine plastic waste is becoming a more serious and pressing problem, it is now time for us to review how we have been contributing to the environment and society and look into what we can do to newly determine our direction. As well as collecting micro-plastic waste through developing the Micro-Plastic Collecting Device, the project includes the following commitments.

We have been voluntarily conducting clean-up activities in seas, rivers, lakes, and ponds where the outboard motors are used. The activity was initiated in 2010 in Hamamatsu, and subsequently held globally from 2011. So far, a total of over 8,000 people from 26 countries have participated. 2020 is the 10th anniversary, and we will continuously conduct this campaign.

To reduce plastic waste, we have started taking action towards reducing the plastic packaging of Suzuki outboard motor products. We adopted alternative packaging materials to some of the products manufactured in June 2020. We are currently assessing their feedback from the market.
For part of the Suzuki marine genuine parts, we have started replacing packaging materials from plastic to paper beginning with October 2020 shipment. Approximately 2.3 tons of plastic will be reduced every year if all packaging of marine genuine parts are replaced to eco-friendly materials.

Propelling the Suzuki Clean Ocean Project is one of our initiatives to solve social issues listed in the SDGs (Sustainable Development Goals). It also expresses Suzuki’s commitment to pursue its brand slogan of “THE ULTIMATE OUTBOARD MOTOR” in the environmental aspect.
In order to clean the ocean, the Suzuki Marine Team will promote the Suzuki Clean Ocean Project together with partners and boat users all around the world.