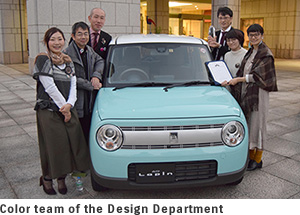 Suzuki Motor Corporation’s Alto Lapin* minicar has won the Grand Prize of the Auto Color Awards 2015-2016, which is organized by the Japan Fashion Color Association (JAFCA). The examination took place on 12 December, 2015 at the Yokohama Museum of Art. The Grand Prize is awarded to the most excellent overall color design. It is the second Grand Prize for Suzuki following the Hustler minicar in the previous year.

*Alto Lapin is sold only in Japan.

Reason for receipt of the award:

“The color design reflects lifestyles of users, and the mind of color designer is realized by utilizing it in detail. The fact that colors which were unlikely to be adopted for cars are boldly challenged and realized is marvelous.”