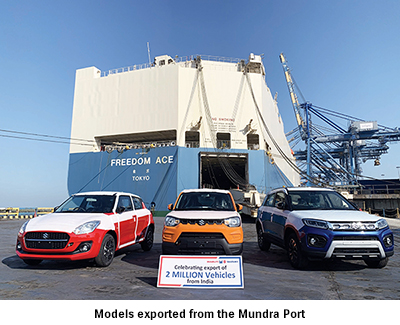 Maruti Suzuki started exporting the Maruti 800 in 1986 to surrounding Asian countries, and first large shipment was exported to Hungary in 1987. The company exported various models including the Alto and the A-Star to global destinations such as Europe and Asia, and achieved its first million in 2012, in 26 years. Subsequently in March 2018, Maruti Suzuki started exports of models produced at Suzuki Motor Gujarat Private Limited, a 100% subsidiary of Suzuki for production of automobiles. The second million was achieved in little less than 9 years since the first million.

Currently, Maruti Suzuki exports 14 models including the Jimny, which began its exports in January 2021, as well as the Baleno, Swift, and Dzire, to over 100 countries and regions. In recent years, the company has expanded its presence in Africa, Latin America, and the Middle East markets.

For Suzuki, India is an important production and export hub of global models. Aligning with this objective, Suzuki continues to strengthen Maruti Suzuki manufacturing capabilities. Suzuki remains committed to the Make In India initiative by the Government of India.