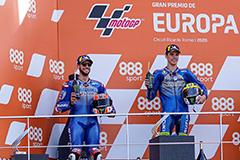 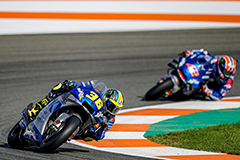 Team SUZUKI ECSTAR’s Joan Mir aboard the GSX-RR won in the MotoGP class of the FIM* Road Racing Grand Prix (MotoGP) 13th round held on 8 November 2020 at the Circuit Ricardo Tormo in Spain. His teammate Alex Rins also achieved the second place podium.
Mir took his maiden MotoGP win since his debut in the class in 2019, and maintained his position as the MotoGP world standing leader. As for Rins, by finishing second, his position jumped up from 6th to 3rd in the standing.
The race started with Rins in the 2nd starting grid, and Mir in the 5th, and in the 2nd lap, Rins became the leader in the race. In the 4th lap, Mir became 2nd to build the one-two scenario for the Team SUZUKI ECSTAR.
By the 17th lap, Mir passed Rins to become the race leader and set the fastest lap time of the race at that point. He gradually expanded the lead and got the chequered flag, while Rins also maintained to defend his position and finished 2nd to make it the first one-two finish of the season for Suzuki.
As of the end of the 13th round, in addition to Mir’s lead in the MotoGP world standing for rider, Suzuki is also the leader in each constructor and team standings.

MotoGP World Standing (as of the end of the 13th round)