Suzuki competes in the FIM World Championship Grand Prix (MotoGP®), to promote Suzuki brand and prove its technological strength. Through racing activities, the company conducts R&D of motorcycles to offer high-quality technologies, product improvements and technology advancements. The EWC, which participants compete with production based motorcycles, is one of the most grueling racing series for not only the machines, riders, but also teams that race for 8 to 24 hours of non-stop multi-laps, closed-circuit racing. Suzuki has won 19 championships in EWC, with the GS series and its successor the GSX-R series, of which 16 have been achieved with the Suzuki Endurance Racing Team (SERT), who has been competing since 1980 and won its first championship in 1983.

Yoshimura was founded in 1954, and since then has been making engine power tuning equipment for four-stroke engines for racing and producing motorcycle parts and accessories. The company was one of the first Japanese teams to race abroad, competing in motorcycle races in the US from 1971, and establishing a base for racing activities there the following year. In Japan, the company had victories in many races, including the first winner of the 1st Suzuka 8-Hours Endurance Race in 1978. Contributing to the development of motorcycles as a globally renowned engine power tuner, Yoshimura first cooperated with Suzuki in 1976, developing the four-stroke GS750 into a racing machine. Together, the two companies have competed in many racing events, right up to the present time.

Aiming to regain the EWC championship in the 2019-2020 season, Suzuki further developed the GSX-R1000R machine together with SERT and Yoshimura, and for the 2021 season Suzuki aims to further strengthen its structure by entrusting the team operation to Yoshimura and compete for back-to-back championships as Yoshimura SERT Motul. Through this new cooperation, the racing know-how that SERT has earned over the years, allied to Yoshimura’s expertise in race machine tuning and team management, will form a new team that embodies the Team Suzuki spirit, to defend the EWC title.

Suzuki aims to enhance the brand image by developing ever more attractive two wheel and ATV products through the feed-back of data earned in racing activities. This process cycle serves to verify the quality of production models at the higher performance levels. 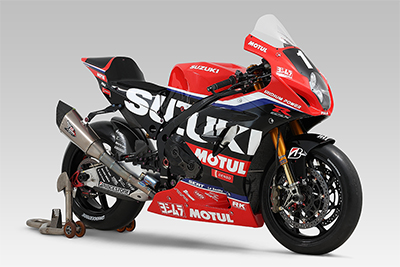