As a key component of this partnership, Suzuki will contribute its expertise in structural analysis, which the automaker uses in the testing of its automobiles, for the development of the HAKUTO-R lunar lander, including the lander’s landing gear, such as the shock-absorption system of the lander’s legs, among other major parts of the structure.

The HAKUTO-R spacecraft must be small and lightweight to decrease the launch cost. However, when reducing size and weight, several measures are required to maintain sufficient strength in the structural design. Leveraging Suzuki’s specialty in the manufacturing of small and lightweight, yet safe and reliable vehicles, the automaker is well equipped to support the structural development of HAKUTO-R’s lunar lander.

To design the legs of the lunar lander for a successful landing, it is necessary to analyze all landing scenarios ahead of the mission to guarantee that the lander can survive the impact. Suzuki will play a key role in the design of the lander’s legs by supporting the analysis of the landing simulations and testing.

By supporting the design of the HAKUTO-R spacecraft, Suzuki will contribute to the lunar economy, in alignment with ispace’s vision of expanding the Earth’s economy to the Moon and, ultimately, expanding human presence into outer space. 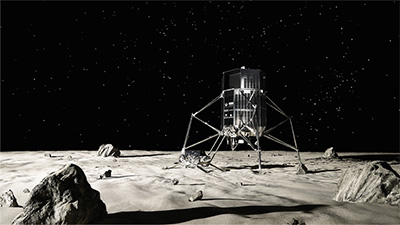 Previously, Suzuki was also a Corporate Partner of HAKUTO, the team managed by ispace during the Google Lunar XPRIZE competition, which called for privately funded teams to be the first to land a robotic spacecraft on the Moon, travel 500 meters, and transmit visual data back to Earth. Suzuki is also a Series A investor of ispace.

Suzuki Motor Corporation (Suzuki) is a brand of mobility including motorcycles, automobiles, and marine products. The Company has the motto of "Develop products of superior value by focusing on the customer" in the first paragraph of its mission statement, and is taking steps in line with daily lives of people throughout the world. Founded as Suzuki Loom Works in 1909, Suzuki enters the motor-vehicle field with the launch of the Power Free 36cc, 2-cycle auxiliary bicycle engine in 1952. Since the initial launch of Suzulight in 1955, Suzuki strives for the manufacturing of small, lightweight, and environmentally-friendly automobiles such as Alto, WagonR, and Swift.

ispace, inc. (ispace) is a private lunar exploration company with a vision to extend human presence beyond Earth. The company has 100 staff from 13 different countries; operates in Japan (HQ), the United States and Europe; and has signed partnerships with the Japan Aerospace Exploration Agency (JAXA) and the Government of Luxembourg. ispace raised nearly $95 million (USD) in Series A funding—the largest on record in Japan and more than almost any other space company in history. ispace also managed Team HAKUTO, one of the 5 finalists in the Google Lunar XPRIZE competition.

HAKUTO-R is the world’s first commercial lunar exploration program. It includes ispace’s first two lunar missions: Mission 1, a soft lunar landing in 2021, and Mission 2, a lunar landing and deployment of a rover for lunar surface exploration in 2023. For both missions, ispace's lander will be a secondary payload on SpaceX’s Falcon 9 rocket. The program is intended to lay the groundwork for a high-frequency, low-cost lunar transportation platform.

The ispace / HAKUTO-R Media Room can be accessed here.