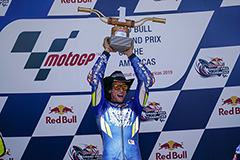 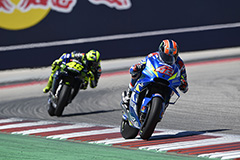 Team SUZUKI ECSTAR’s Alex Rins aboard the GSX-RR won in the MotoGP class of the FIM* Road Racing Grand Prix (MotoGP) third round held on 14 April 2019 at the Circuit Of The Americas in the US. This gave Suzuki its first win in two years and seven months since the 12th round British Grand Prix held in September 2016.

The race day was held in dry condition as the rain in the previous morning stopped. Rins, who passed the qualifying round in 7th position, started the race from the third row and immediately took his position right behind the second position runners. While some retired, he jumped up to second positon toward the end. With four laps remaining, Rins finally took the lead up to the top position and passed the chequered flag.

This gave Rins his first MotoGP win and his championship standing was raised up to third place. While his teammate Joan Mir was forced a ride-through penalty due to a jump-start, he completed the race in 17th.

Despite tough racing conditions, each and every member of the Team SUZUKI ECSTAR took part in setting up the machine, and brought out their teamwork and high performance of the GSX-RR to achieve its first win of the season.