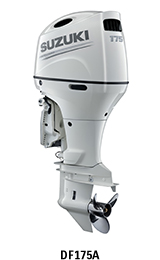 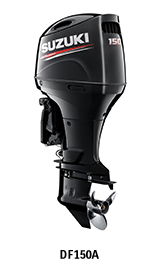 Suzuki Motor Corporation has unveiled all-new large outboard motors DF175A and DF150A at the Genoa Boat Show which is being held in Genoa, Italy from 20 to 25 September 2018.

DF175A and DF150A will be produced at the Kosai Plant in Japan, and will be sold worldwide including North America, Europe and Japan.
Full lineup of Suzuki outboards from DF2.5 to DF350A including new white models of smaller outboards are exhibited at the Genoa Boat Show. 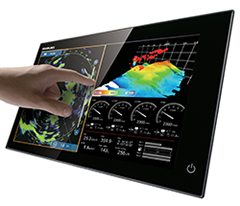 Plus, newly-developed Suzuki Multi-Function Display will be premiered. It comes in a variety of sizes (7, 9, 12 and 16-inch screens) including the 16-inch screen, which is the largest* size offered by the outboard manufacturer.
Suzuki’s aim with this new premium accessory is to provide the ultimate connectivity to unite the boat driver with the surrounding environment.
This is achieved through valuable features such as chart plotter, radar, fish finder and weather information via an internet connection. On top of that, this new screen gives drivers access to all Suzuki engine data, so they can easily and quickly see the performance of the outboard/s in one clear view.
Unlike any other display screens on the market, Suzuki’s new Multi-Function Display can be set up to display just engine data, or a combination of engine and environmental information.

*Based on Suzuki research in September 2018.