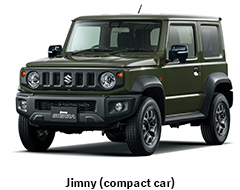 Since first launched in 1970 as the only 4WD minicar in Japan at that time, the Jimny has played an important role as means of transportation in various professional work-sites, as well as in mountains and snow zones. It has also pioneered the needs for leisure uses with its authentic 4WD performances and familiarity, and built the compact 4WD market in Japan.

In 1977, the first compact car Jimny, the LJ80 (sold in Japan as Jimny 8), was launched. It installed a 0.8 litre engine onto a body based on the minicar Jimny, and was active as an authentic compact 4WD vehicle in overseas markets as well.

The Jimny has shown its performances in a wide range of scenes from daily to leisure uses in 194 countries and regions worldwide. It is Suzuki’s flagship model with 285 million units*1 sold worldwide, and the one and only compact 4WD vehicle that Japan boasts to the world.

The all-new Jimny has further evolved their desired authentic 4WD performances while inheriting its half a century of core concept and technologies.

Functionality is pursued in both interior and exterior designs, with manoeuvrable body size, while also pursuing user-friendliness to meet various needs by evolving its visibility, as well as roominess and ease of use in luggage space.

The all-new Jimny is produced at Suzuki’s Kosai Plant in Japan for the first time, and it will be distributed worldwide. Equipped with authentic driving performances for customers who are in need of this car, while adopting design and equipment for a wide range of customers to choose as their tools to enjoy leisure and express their lifestyles, Suzuki offers a long-loving compact 4WD to Japan and throughout the world.

<Main features of the all-new Jimny>