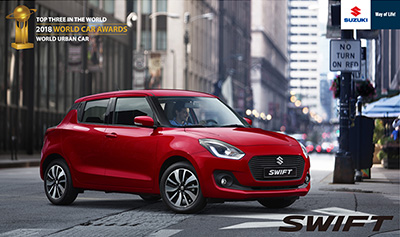 The final results of the World Car Awards were announced today at the New York International Auto Show, and Suzuki’s Swift became the second consecutive Suzuki model selected as TOP 3 of the World Urban Car award following the Ignis in 2017 World Urban Car.

As Suzuki’s first world strategic model, Swift sold over six million units worldwide since its launch in 2004*. It is favoured in 158 countries and regions* including Japan, Europe, and India, featuring its distinctive and sporty styling, superb driving performance, and an excellent handling.

*Based on Suzuki research as of February 2018.

World Urban Car was established last year for models that are less than approximately 4 metres long, and eight models were nominated for this year. Swift was announced as one of the finalist models at the Geneva International Motor Show on 6 March, along with Ford’s Fiesta and Volkswagen’s Polo, and the 2018 World Urban Car went to Volkswagen’s Polo.