*All the features mentioned in the following press release are of XBEE compact crossover wagon exclusively distributed in the Japanese domestic market.

Suzuki Launches the New XBEE in Japan
- Compact crossover wagon of a whole new genre, fused with wagon and SUV - 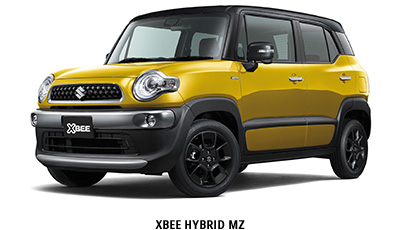 Suzuki Motor Corporation has today launched the new XBEE (cross-bee) in Japan, a compact crossover wagon of a whole new genre, fused with spacious cabin of a wagon and the fun of an SUV.

The new XBEE has spacious cabin and user-friendliness of a wagon, distinctive and lovable design, strong driving performance on rough roads such as on snow, and practicality of an SUV. It is a compact crossover wagon of a whole new genre that meets wide range of lifestyles from city riding to leisure activities such as outdoors and sports.

The all-new XBEE adopts the Suzuki Safety Support, Suzuki’s preventive safety technology which supports driving safely and confidently. It comes with Dual Sensor Brake Support (DSBS) collision-mitigating system and the Back-up Brake Support collision-mitigating system for backing-up, which is installed for the first time on Suzuki’s compact car.
It is also installed with functions that support safety driving including a 3D View that lets the driver see the vehicle’s 360-degreee surroundings in three-dimensional view. The new XBEE qualifies for Sapo Car S Wide*1 of the Safety Support Car (Sapo Car)*1, which is promoted by the Ministry of Economy, Trade and Industry, and the Ministry of Land, Infrastructure, Transport and Tourism for its expansion.

It adopts light and rigid new-generation platform “HEARTECT”, and all variants are installed with 1.0L direct-injection turbo engine and mild hybrid system. Combines with six-speed automatic transmission, it strikes a balance between driving performance with plenty of power and excellent fuel efficiency.

The 4WD variant is installed with two new driving modes: powerful Sport mode; and Snow mode that suppresses spinning of tires in starting and accelerating on snow and icy roads. The 4WD variant also comes with standard equipment of two more driving functions: Grip Control that supports starting on muddy and slippery roads; and Hill Descent Control that maintains vehicle speed at 7km/h when descending on steep downhill.