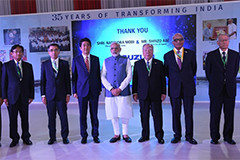 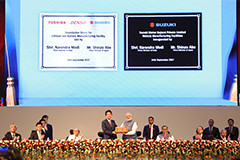 Suzuki Motor Corporation has held ceremonies for opening of Gujarat Plant and cornerstone laying of a lithium-ion battery plant which is to be set up by a joint venture between Toshiba, Denso, and Suzuki. The ceremonies were held on 14 September, 2017 in an event that took place at the Mahatma Mandir, an international convention centre located in Gandhinagar, Gujarat.

At the commemorative ceremonies, videos introduced new automobile manufacturing plant of a 100% Suzuki-invested manufacturing subsidiary Suzuki Motor Gujarat (SMG), which started production from this February, as well as India’s first automobile lithium-ion battery plant which has been decided to be constructed in a supplier park neighbouring to SMG by a joint venture between Toshiba, Denso, and Suzuki.
Moreover, unveiling ceremony of commemorative plates for opening of new Gujarat Plant and cornerstone laying of lithium-ion battery plant were also held.

Suzuki continues to cooperate with the “Make in India” and “Skill India” policies of the government of India and make efforts in development of the Indian automobile industry.