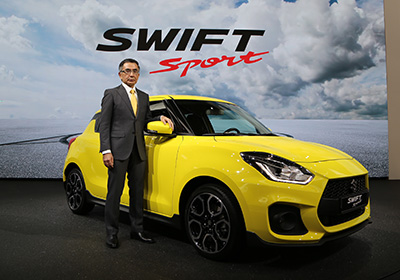 Suzuki Motor Corporation made global premiere of new Swift Sport on 12 September, 2017, at the 67th IAA Frankfurt Motor Show (press days on 12 and 13 September, and public days from 14 to 24 September). Total of nine models of automobiles, motorcycle, and outboard motor are exhibited at the show.
The third-generation Swift Sport features a lower, wider stance, more aggressive styling, and a torque-to-weight ratio that propels the Swift Sport into genuine hot hatch territory. “We know that our customers value a dynamic driving experience above everything else,” says Swift Sport chief engineer Masao KOBORI, “so we’ve made the new Swift Sport lighter, faster and more stimulating in every way.”

At the press conference held on 12 September, Toshihiro Suzuki, President, Suzuki Motor Corporation said “Our third-generation model is the best, most aggressive Swift Sport ever. The result is a car that, regardless of your current experience, is exciting to be in and exciting to drive. Just get behind the wheel and you will feel the heat.”
Debuted in 2005 as the flagship of our very first global strategic model, the Swift, the Swift Sport has always been acclaimed as a controllable, affordable and truly sporty hatchback.
The new Swift Sport is planned to be launched in Europe in the spring of 2018. Its sales will initially start in Japan from 20 September, 2017.