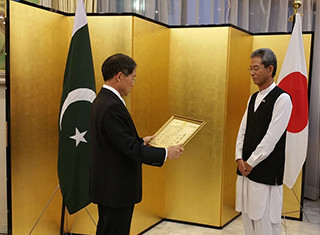 Suzuki Motor Corporation’s Hirofumi Nagao, Managing Officer based in Pak Suzuki Motor Co., Ltd. (Pakistan) has been selected for Japanese Foreign Minister’s Commendation for FY2017 by the Ministry of Foreign Affairs. The commendation was awarded to him by Ambassador of Japan to Pakistan, H.E. Mr. Takashi Kurai at the Embassy of Japan in Pakistan on 22 August.

The Foreign Minister’s Commendations are awarded to individuals and groups with outstanding achievements in international fields, in order to acknowledge their contributions to the promotion of friendship between Japan and other countries and areas, and ask for understanding and support of their activities to the Japanese citizens. For FY2017, the commendations are awarded to 187 individuals, of which 160 are stationed overseas.

Hirofumi Nagao entered Suzuki Motor Co., Ltd. (present Suzuki Motor Corporation) in 1978, and was first stationed in Pakistan subsidiary Pak Suzuki Motor Co., Ltd. (Pak Suzuki) from 1983. He was later stationed there twice as president. Up to today, he has spent a total of about 20 years in Pakistan. During his career in Pakistan, he has contributed in the development of Pakistan's automobile industry, as well as in strengthening the economic relations and further deepening the relationship of mutual trust between Japan and Pakistan through development of motorisation.

<History of Suzuki in Pakistan>