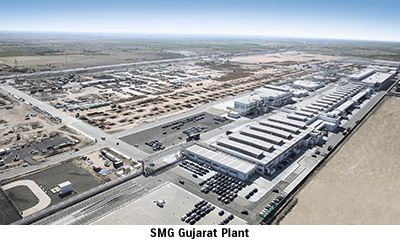 Suzuki Motor Gujarat Private Limited (SMG, located in Ahmedabad, Gujarat in India), a 100% subsidiary of Suzuki Motor Corporation for the production of automobiles, has completed construction of the Gujarat Plant (located in Hansalpur, Gujarat). SMG will start manufacturing of production models from 1 February, 2017.

SMG was established in March 2014 as Suzuki’s first 100% Suzuki- investment automobile production company in India, aiming to secure production ability in preparation for the automobile market growth in India, as well as for expansion of exports from India. Located close to the Mundra Port, the Gujarat Plant will be utilized as the export hub for markets including Europe, Africa, and Japan. By making it a different manufacturing company from Maruti Suzuki, Suzuki aims to enhance productivity and quality of Suzuki automobiles through their mutual thriving and challenging.

Vehicles produced at the Gujarat Plant will be supplied to Maruti Suzuki. Initially, Baleno premium hatchback will be produced for sales through Maruti Suzuki’s NEXA channel. Production lineup is scheduled to be increased according to the market situation.

Maruti Suzuki’s production result for 2016 was 1,515 thousand units in total from its two plants in Gurgaon and Manesar, which had been operating in full capacity. The Gujarat Plant will gradually put its production on track. Its annual production ability would be 250,000 units. Gujarat Plant No.2 and engine/transmission plants are also planned to be constructed, which are aimed to start operation in the beginning of 2019. With the completion of the Plant No.2, Suzuki’s production ability in India would be 2 million units to meet the expanding needs of automobile market in India.

<Overview of SMG and Gujarat Plant>