Suzuki Motor Corporation has unveiled four new motorcycle models for the overseas market for 2017 at the EICMA 2016 (Milan Show), which is being held in Milan, Italy from 8 to 13 November, 2016*.

Suzuki will launch the comprehensively enhanced version of the luxury scooter, the all-new BURGMAN 400. Plus, GSX-S125 street sportbike, GSX250R standard sportbike, and V-Strom 250 adventure bike will be newly introduced.
BURGMAN 400 will be launched from the spring of 2017 in areas including Europe and North America, while launch of GSX-S125 to begin from the summer in Europe and other areas. As for GSX250R and V-Strom 250, they will first be launched in China from the winter of 2016 and the summer of 2017, respectively, before being launched globally. Together with five models unveiled at INTERMOT International Motorcycle, Scooter and Bicycle Fair held in Cologne, Germany in October 2016, Suzuki will introduce a total of nine new models for 2017 and aim to fulfill the products for sales expansion.

<Overview of new models unveiled at the Milan Show>

Comprehensively enhanced version of the luxury scooter, the all-new BURGMAN 400 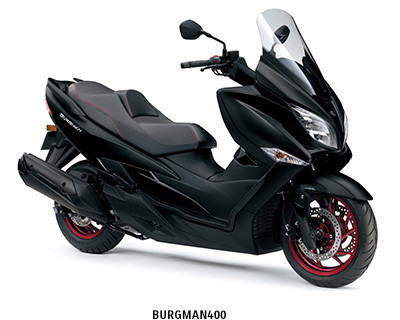 The all-new BURGMAN 400 is a comprehensively enhanced version of the luxury scooter that features comfort, power, plenty of storage space, and elegant styling. Based on the design concept of “BURGMAN COUPÉ”, the styling design has a slimmer, sportier, and more agile look, while preserving the luxurious styling and ride comfort for which the BURGMAN is known. LEDs are adopted on dual headlights common to the BURGMAN series, as well as on taillights with sharply sculpted design that expresses elegance and agility. Large 42L underseat compartment is assured while having weight reduction throughout the whole vehicle for enhanced manoeuvrability. 399cm3 DOHC engine produces greater low-to-midrange torque by adopting a larger air cleaner box, realizing instant throttle response and more powerful acceleration, while complying with the new Euro4 emissions standards (for European specification).

The GSX-S125 is a new model to the GSX-S street sportbike series, which shares common engine and frame with the GSX-R125 unveiled at the INTERMOT held in October 2016. To extend its appeal and allow beginner and younger riders to enjoy, it installs a 124cm3 water-cooled four-valve single-cylinder DOHC engine onto a light and compact chassis. It has adopted a crouching styling design image common to the series, and made a single-action shuttered key system, the Suzuki Easy Start System, which enables the rider to just one-push the starter instead of press-holding it to start the engine, and ABS as standard equipment.

The GSX250R is a stylish standard sportbike with daily ease of use in city riding. By reducing friction loss and improving combustion efficiency, 248cm3 two-cylinder engine has output characteristic that features ease of control in low-to-midrange, a range that is used often in city riding. It has adopted a sporty styling which inherits Suzuki’s sportbike heritage, separate left and right handlebars, and independent rider and passenger seats, while realizing a comfortable riding position. 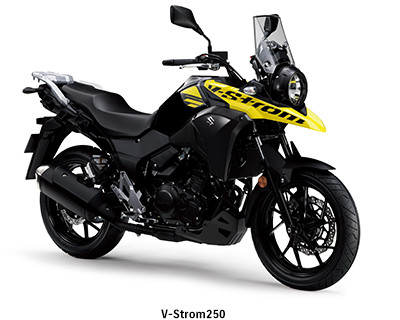 The V-Strom 250 is a Sport Adventure Tourer which combines touring comfort with daily ease of use. As a new V-Strom series model, it adopts a design image common to the series. The headlight design has a tough and strong image of outdoors. For more comfort in long distance touring, the handlebar position offers a comfortable upright riding position, and a windscreen provides highly effective shielding.