Suzuki Motor Corporation has unveiled five new motorcycle models for the overseas market including Europe and North America for 2017 at the INTERMOT International Motorcycle, Scooter and Bicycle Fair held in Cologne, Germany from 4 to 9 October, 2016*.

In addition to the above five models, four more models are to be unveiled at the EICMA2016 (Milan Show), which will be held in Milan, Italy in November. Suzuki is scheduled to introduce a total of nine new models in 2017.

At the press conference held on 4 October, Toshihiro Suzuki, President, Suzuki Motor Corporation said, “Today you will see that we are continuing to build the Suzuki brand, and position motorcycles as a core part of Suzuki’s entire business group. As part of this, we are introducing enhanced model series that can be enjoyed by everyone, from people just starting out on a bike through to veteran riders. Looking ahead, there is much more to come from Suzuki, as we strive to produce refreshing, creative products that exceed expectations in every possible way.”

<Overview of new models unveiled at the INTERMOT>

Flagship supersport bike of Suzuki, the all-new GSX-R1000 and GSX-R1000R 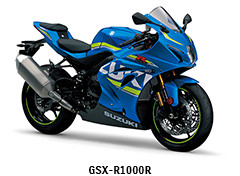 Comprehensively enhanced for the first time in eight years, the sixth-generation of Suzuki’s flagship supersport bike GSX-R1000 and its advanced version GSX-R1000R have been evolved further by incorporating technologies earned in MotoGP. The features of GSX-R series, “Run. Turn. Stop.”, which are the fundamental design of harmonizing the engine and chassis, are thoroughly reviewed and balanced in high dimension.

Main features of the GSX-R1000R

New model with the smallest displacement in the GSX-R series, the GSX-R125 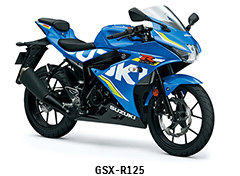 GSX-R125 is a new GSX-R model that extends its appeal and allows beginner and younger riders to enjoy the special GSX-R experience by installing a 124cm3 engine (the smallest displacement engine in the series) onto a light and compact chassis. The water-cooled four-valve single-cylinder DOHC engine realizes high performance that deserves the name of GSX-R. It has ABS as standard equipment, and adopted a keyless ignition system and the Suzuki Easy Start System. The sporty styling inherits the GSX-R design. 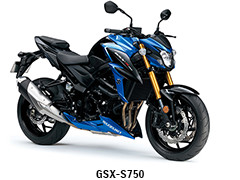 GSX-S750 is the second GSX-S series model following the GSX-S1000, which has been earning high appraisal for its sharp throttle response and manoeuvrability since it was unveiled at the previous INTERMOT in 2014. GSX-S750 has adopted features common to the series such as a crouching styling design, three-level traction control, and radial mount front brake calipers. Plus, it is equipped with petal-type front and rear brake discs and tapered handlebars. Moreover, it has standard equipment of Low RPM Assist and Suzuki Easy Start System, and an offer of ABS variant. High output 749cm3 in-line four-cylinder engine has been pursued to realize uplifting acceleration derived from the GSX-R750 and user-friendliness on public roads. It meets the Euro4 emission standards (for European specification). 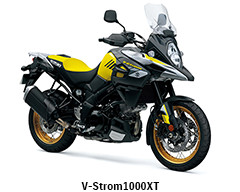 V-Strom 1000 and V-Strom 1000XT are comprehensively enhanced models of the Sport Adventure Tourer for comfortable riding in various situations of long-distance touring. It meets the Euro4 emission standards while maintaining the characteristic of the 1,037cm3 V-twin engine (for European specification). The styling design has undergone a major change giving the V-Strom a hint of Suzuki’s adventure bikes that started from the 1988 DR750S. It has enhanced comfort with the knuckle covers and under cowling as standard equipment, and the length of height and angle adjustable wind screen raised by 49mm. Plus, safety and convenience are enhanced with the newly adopted features such as the Motion Track Brake System, which enables ABS to activate also when the vehicle is leaning to either side, and automatically applies pressure to the rear brake to stabilize the vehicle when the front brake pressure rises to a certain degree; Low RPM Assist; and Suzuki Easy Start System. Wire-spoke wheel equipped V-Strom 1000XT, which has enhanced shock absorption performance in the low speed range, is newly introduced and comes with tapered handlebars as standard equipment.

Further evolved as the V-Strom series, the all-new V-Strom 650 and V-Strom 650XT 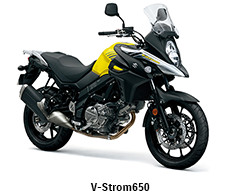 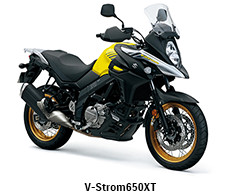 V-Strom 650 and V-Strom 650XT are comprehensively enhanced models of the middle displacement Sport Adventure Tourer. Installed with the 645cm3 V-twin engine common to the SV650, a model unveiled at the 2015 Milan Show, it has enhanced output and torque, and meets the Euro4 emission standards (for European specification). By adopting new features common to the V-Strom 1000 such as styling design, traction control, Low RPM Assist, and Suzuki Easy Start System, it now has unity among the V-Strom series and evolved further. The wire-spoke wheel equipped V-Strom 650XT has standard equipment of knuckle covers and under cowling.