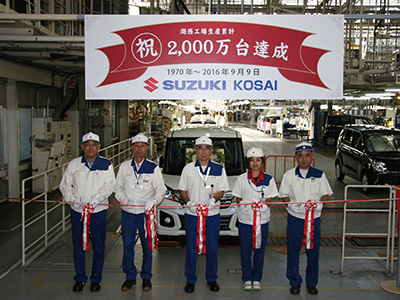 Kosai Plant becomes the first automobile plant in Suzuki’s global production sites to reach 20 million units, in 45 years and 11 months since the start of production. The 20 millionth model was the SPACIA minicar.

Kosai Plant started out as a production site for minivehicles in October 1970. In August 1983, a second plant started operation for compact cars, taking exports of those units into concern as well.

Currently, the Kosai Plant serves as Suzuki’s main production site for minivehicles including models such as the ALTO, WAGON R, and HUSTLER.

In line with Suzuki’s manufacturing fundamental of “Smaller, Fewer, Lighter, Shorter, and Neater”, it has always put efforts into pursuing production efficiency. Also, upon expanding production sites in overseas, it has served as a mother plant that shows a role model of manufacturing system and production management.