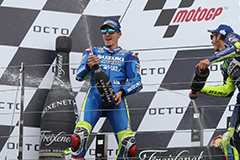 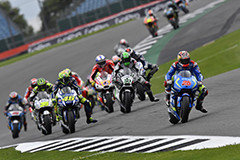 Maverick Vinales aboard with GSX-RR wins at the 12th round of FIM (*) Road Racing World Championship MotoGP, the pinnacle championship in motorcycle racing, held at Silverstone circuit in the UK on September the 4th. This is the first MotoGP victory for Suzuki since the French GP held in May 2007 and also Suzuki’s first win since it returned to the MotoGP championship in 2015.

The race was held in dry conditions following wet free practice qualifying sessions the previous day. The race was initially red-flagged following a first lap crash involving two riders when Vinales was leading after starting from 3rd position on the grid on the front row. After the re-start Vinales again took the lead on the 1st lap and then pulled away gradually from the battle for second place to run alone at the front, finishing around 3.5 seconds ahead of the second placed rider.

This was Vinales’ first victory in the MotoGP class and improved his championship position from 5th to 4th. His team mate, Aleix Espargaro finished the race in 7th position.