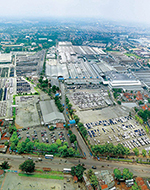 In 2016, Suzuki is commemorating the 40th anniversary of its automobile business in Indonesia. Suzuki started its four-wheel business in Indonesia with an assembly plant in Pulogadung, East Jakarta in 1976. At that time, it produced and marketed models such as the Pick Up Carry ST 10. Today, the Carry is still a favourite choice for entrepreneurs to support their businesses.

As it expands its business in both the domestic and international markets, Suzuki has 3 manufacturing plants in Indonesia, located in Cakung, Tambun, and Cikarang. With a total investment of approximately US$ 1 billion, the Cikarang plant demonstrates Suzuki’s long-term commitment to growing the Indonesian and overseas markets.

Suzuki’s share of the Indonesian automobile market increased 2.7% from 9.2% in 2010 to 11.9% in 2015, highlighting Suzuki’s positive performance. In keeping with the Suzuki Corporate Mission to “Develop products of superior value by focusing on the customer”, Suzuki is actively working to develop high-value vehicles to meet the expectations of its Indonesian customers. The design of New SX4 S-CROSS reflects Suzuki’s determination to create a new kind of crossover, offering superi or aerodynamic performance for excellent fuel efficiency. In addition, it is equipped with a variety of new features including shift paddles integrated in the steering wheel for an exhilarating driving experience, cruise control, advanced audio system with 7-inch screen, and HID tech headlamps. The New SX4 S-CROSS is intended to attract active and adventurous people who like to explore life.

For GIIAS 2016, Suzuki is exhibiting a variety of crossover models, which offer fresh perspectives for enjoying fast-moving lifestyles.

Dynamic and appealing, this smart compact urban crossover is built on a new-generation platform. Its design is bold and unconventional, with a high ground clearance that gives the driver a feeling of confidence, even on rough roads. 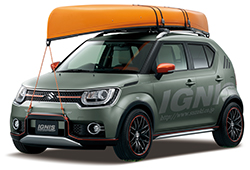 This concept model based on the Ignis is a perfect fit for grown-ups who actively enjoy adventure weekends. The tough guards and mouldings surrounding the body, interior with quality leather, and cool Matt finish Khaki metallic body colour with vivid orange accents all combine to give a smart and active appearance. 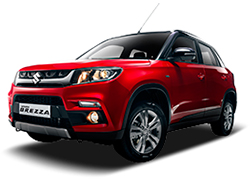 This compact urban SUV is strong and masculine. Its raised stance and dynamic styling inject style and glamour into the SUV market. The interior is bold, impressive and contemporary: the dashboard features a futuristic layout, dynamic garnishing, an advanced meter cluster, sporty seats, and smart and versatile flip-and-fold rear seats.

The Jimny is an authentic off-road model with a storied history. Suzuki introduced the very first model of the Jimny series, the LJ10, in 1970. It was followed in Indonesia by the LJ80, also known as the ‘Jimny Jangkrik’. To replace the LJ, the second generation of Jimny, the sportier SJ30, began global production in 1981. In the 1990s, the SJ series, including the well-known ‘Sierra’, ‘Katana’, and ‘Caribian’ models, was developed. The third generation of Jimny was launched in Indonesia in 1998.

The Jimny is a highly functional vehicle that fits into a variety of lifestyles. The legendary LJ80 is on display in the Suzuki booth, side-by-side with the current Jimny model. 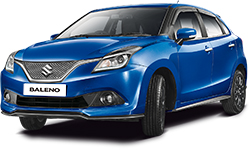 With its stylish design, spacious interior and Suzuki’s latest technologies, the Baleno is the ideal compact hatchback, incorporating over 60 years of Suzuki experience making compact cars.

The Baleno’s sporty and elegant styling is based on a “Liquid Flow” design theme that suggests an energetic mass of liquid in motion. The cabin offers comfortable seating for adults in both the front and rear seats, as well as class-leading luggage capacity of 339 litres*. Looking at the advanced technology, the Baleno features a light, highly rigid new-generation platform which enhances driving performance and fuel efficiency, without sacrificing collision safety or NVH performance.

The adoption of the exclusive aggressive front and rear bumpers and side skirts, first unveiled at the Frankfurt Motor Show 2015, further emphasise its sporty image and powerful presence.

*Based on a Suzuki survey of B-segment hatchbacks as defined by Suzuki (a hatchback model with an overall length of 3,700 - 4,100 mm) and measured using the German Association of the Automotive Industry (VDA) method.

Suzuki’s new-generation platform is designed to efficiently increase rigidity while reducing weight. It was enabled by optimising overall vehicle design, including a fundamental redesign of the underbody structure and parts. The result is enhanced fuel efficiency, safe ty, handling, stability, and NVH performance. In addition, Suzuki is working to streamline new model development by consolidating its four existing platforms down to three, and making functional components modular. This will speed development of new vehicles while enhancing efficiency, enabling Suzuki to better meet the demands of a fast-changing market.

The newly developed 1.0-litre K10C petrol engine features major advances in thermal efficiency resulting from an improved compression ratio, the adoption of a dual-injection system, and friction reduction, to achieve a high-level balance between dynamic performance and fuel efficiency.

To help optimise the compression ratio to efficiently convert fue l energy to mechanical energy, Suzuki adopted a cooled EGR system and piston cooling jets to suppress uncontrolled combustion knocking and pre-ignition. Combustion efficiency has also been enhanced through the adoption of a dual-injection system and a bowl-shaped piston crown. In the pursuit of ultimate thermal efficiency, Suzuki has also utilised a variety of friction reduction technologies, such as the use of roller-rocker type valve lifters to reduce mechanical resistance and loss of energy in the engine.