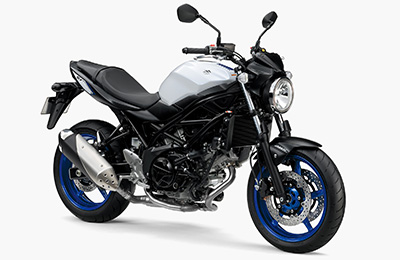 Suzuki Motor Corporation will launch the all-new SV650 ABS, a slim and lightweight road sportbike with 650cc V-twin engine on 11 August, 2016 in Japan.

By brushing up the controllability of the much-favoured original SV650 further, the all-new SV650 ABS offers nimble handling and responsive and strong acceleration, while combining great manoeuvrability. The SV650 ABS was first showcased as a global model at the Milan Show held in Italy in November 2015. Exports to overseas market started from this January.

The V-twin engine delivers deep rumble in low rev range, strong and linear torque in mid-range, smoothly runs up to high rpm range. The superior controllability was realised by installing it onto a slim and lightweight chassis.
For the engine, first in the Suzuki motorcycle, each piston skirt is tinned and resin coated, resulting in reduction of friction. Also, Low RPM Assist is adopted to help rider for smoother launching operation in low rpm range. By slightly raising engine rpm, it makes it easy to ride at low speed in stop and go traffic. Moreover, Suzuki Easy Start System, which enables the rider to just one-push the starter instead of press-holding it to start the engine, is adopted, enhancing user-friendliness in daily usage.