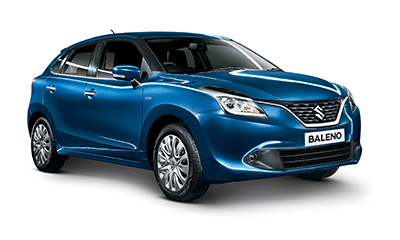 Exhibited at the Frankfurt Motor Show held this September, Baleno is the new compact car, which harmonizes dynamic yet elegant styling, optimum packaging, and high performances. Variations of engines for the Indian market are 1.2L gasoline and 1.3L diesel.

Through its premium sales channel NEXA, Maruti Suzuki will market Baleno as the premium hatchback from 26 October. Baleno is the second premium model offered through the NEXA channel, after the new crossover S-CROSS, and Maruti Suzuki will aim to expand sales in India through its launch.

As of the first six months of this fiscal year from April to September, Maruti Suzuki’s wholesale in India is 628,963 units (up 13% year-on-year, with passenger car market share of 47.3%*).

Suzuki plans to export Baleno to the global market including Europe by producing it at Maruti Suzuki’s Manesar plant as the global car.