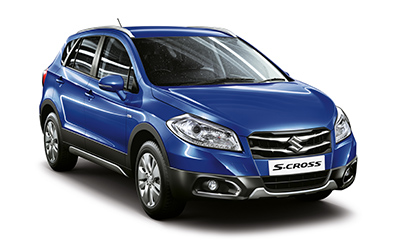 S-CROSS offers a choice of two engines, which are installed on a new platform: DDiS 320, a newly-developed 1.6L diesel engine that boasts high torque while realizing high fuel efficiency and low emissions; and DDiS200 1.3L diesel engine. S-CROSS satisfies at a high level, everything including design, utility, driving performance, and fuel efficiency. It has the comfort of a sedan and the performance of an SUV, offering brisk driving in city and comfortable riding even on various roads outside a city. S-CROSS is a crossover which can be used in a wide variety of usage even for family usage.

S-CROSS is the first model to be sold under the newly-established sales channel NEXA. Maruti Suzuki plans to open 100 NEXA dealers within this fiscal year, and increase the dealership eventually.

India is the third country to produce SX4 S-CROSS after Hungary and China. By adding the S-CROSS to its lineup, Maruti Suzuki will make efforts to maintain and expand its market share in India.

Main specification of the S-CROSS