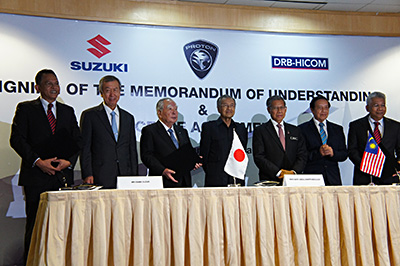 As the first step of the collaboration, SMC will supply KD components for a model of Suzuki automobile to PROTON. PROTON will manufacture at its own plant, distribute and sell such model under PROTON brand through its sales network in Malaysia. The first model will be a compact passenger car, to be manufactured at the PROTON Tanjung Malim plant from around August 2016. Other additional models will be mutually studied by PROTON and SMC.
Furthermore in future, supply of engines and transmissions by Suzuki to PROTON and installation of such engines and transmissions by PROTON for its own models will be also studied.

Mr. Osamu Suzuki, Chairman & CEO, said “All this while we have carried out our automobile business in Malaysia on our own. Through the collaboration with PROTON from now on, we would like to develop a comprehensive synergy between the two companies.”

PROTON is the first national carmaker in Malaysia established in 1983 and sold about 116,000 vehicles in 2014, having about 17% market share in Malaysia.