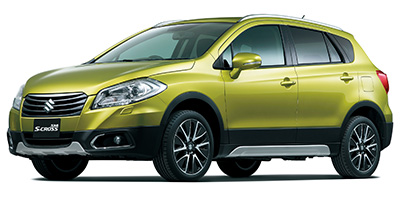 Suzuki Motor Corporation has launched the SX4 S-CROSS, a crossover of a passenger car and SUV, on 19 February, 2015 in Japan.

The SX4 S-CROSS is a crossover model which was created by uniting Suzuki’s compact-car know-how with 4WD technologies. It is produced by Magyar Suzuki Corporation Ltd., Suzuki’s subsidiary in Hungary, and imported to Japan by Suzuki.
Packed within the exterior design that forefeels active driving are roomy cabin space and ample luggage space. It also features a powertrain that combines strong acceleration with superior fuel efficiency, and suspensions that realise agile driving.
Plus, the 4WD variant comes with ALLGRIP, Suzuki’s unique, new 4WD system. The SX4 S-CROSS is a model that realises excellent drivability and stability in various driving scenes, which can be used in a wide range of usage from daily use to outdoors by satisfying design, convenience, and fuel efficiency at a high level.

The production of the SX4 S-CROSS started from August 2013 by Magyar Suzuki and they are exported throughout Europe, as well as to areas including Latin America, Oceania, and Africa. Its production also began in China from December 2013 by Suzuki’s joint venture Chongqing Changan Suzuki Automobile Co., Ltd. It has been earning high appraisal for its cabin and luggage space, excellent driving performance, etc.