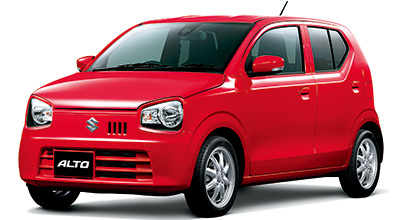 Suzuki Motor Corporation has launched the all-new Alto minicar in Japan on 22 December, 2014.

Alto was first launched in May 1979 in Japan as a utility minicar with the ease of driving and use, economic efficiency, and inexpensive price setting. It became popular mainly among female customers and pioneered a new market for minicars.
Since its launch, Alto had evolved in terms of function and performance in line with the needs of the times. Throughout its 35-year history, Alto has been favored by many customers, with its accumulated domestic sales of approximately 4.83 million units*1. It is a model that represents Japanese minicars.

The all-new eighth generation Alto has adopted a newly-developed platform for the first time and achieved a weight reduction of 60kg*2 by thoroughly reducing its weight. Along with the enhanced efficiency of the powertrain, it has realized fuel consumption of 37.0km/L*3, the lowest among non-hybrid gasoline vehicle in Japan*4. It also combines light and steady driving performance.
While adopting a simple and stylish design with the exterior emphasizing quality and proportion, and the interior combining design and function, it also realizes roomy cabin space with the longest cabin length in its class*5, owing to its stretched long wheelbase.
Further, by incorporating advanced safety technologies such as the Radar Brake Support collision-mitigation braking system, the Alto has evolved in fuel efficiency, driving performance, design, and safety performance, while brushing up basic performances including the ease of maneuverability and handling.

Main features of the all-new Alto

Features of the Alto

1. Combined light and steady driving performance with the lowest fuel consumption among non-hybrid gasoline vehicle in Japan*4 of 37.0km/L*3.

Transmission with pursuit on fuel efficiency and driving

2. Achieved weight reduction of 60kg*2 as compared to the conventional model. Realized the lightest weight*6 of 610kg*7.

Exterior design with pursuit on proportion

4. Comfortable cabin space with the ease of driving.