Suzuki has unveiled six new overseas motorcycle models for 2015 at the INTERMOT International Motorcycle, Scooter and Bicycle Fair held in Cologne, Germany from 30 September to 5 October, 2014*. 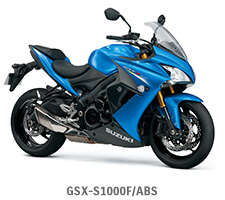 Naked bike GSX-S1000/ABS and fully-faired GSX-S1000F/ABS are streetbikes that Suzuki newly introduces as GSX-S to the GSX series, which is composed of the MotoGP machine GSX-RR and supersport bike GSX-R. Equipped on the newly developed lightweight frame is a modified in-line four-cylinder engine based on the GSX-R1000. It has been tuned to optimize public roads without detracting the broad torque in the low to mid speed range and output character in the high rev range. It is equipped with traction control that can be selected from three modes*, Brembo radial mount front brake calipers, and Renthal aluminum handlebar, while also offering ABS range. The push start system has been adopted for the first time on Suzuki’s large displacement motorcycles.

Suzuki plans to produce GSX-S1000/ABS from March 2015 and GSX-S1000F/ABS from April at the Toyokawa Plant in Japan, and start its sales in markets such as Europe and North America.

Sport Adventure Tourer with a design that gives an image of adventure, V-Strom650XT ABS 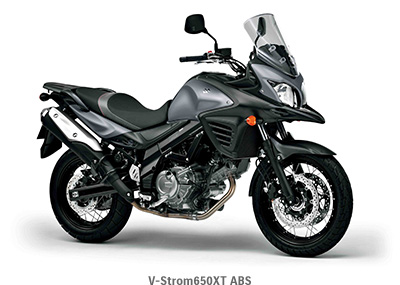 Suzuki has adopted a newly designed front fairing that gives an image of adventure to the V-Strom650 ABS, a popular touring model that can enjoy riding from city to long distance touring. By equipping wire-spoked wheels, it has enhanced its shock absorption performance in the low speed range.
Suzuki plans to launch it in Japan in October 2014 and start its sales in markets such as Europe and North America. 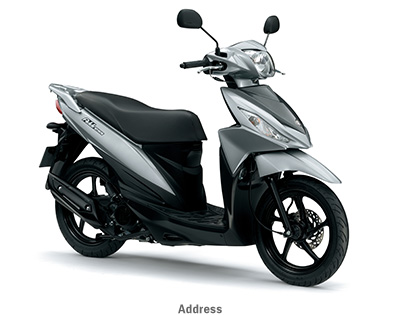 Address is a 110cc scooter with characteristics such as user-friendly large storage space and superior acceleration performance and fuel efficiency. It has a superior acceleration in the low to mid speed range, while realizing fuel efficiency of 49km/L* by increasing thermal efficiency and decreasing frictional resistance of the engine. Large under seat storage space holds a capacity of 20.6L, which not only stores a full face helmet, but also a rain coat and a pair of gloves. The storage space inside the leg shield can store a 600ml bottle on the left side, and a 500ml on the right side. It has also adopted equipment such as a steering lock with a seat opener, taking user-friendliness into concern.

*Measured by Suzuki in the WMTC test cycle.

Suzuki plans to start its production from January 2015 at PT. Suzuki Indomobil Motor, Suzuki’s Indonesian subsidiary, and start its sales in Europe. Suzuki has added an ABS variant to the GSX-R1000, a supersport bike that represents Suzuki motorcycles. Also, to commemorate Suzuki’s participation in the MotoGP from 2015, coloring similar to the MotoGP machine GSX-RR has been introduced to both ABS and non-ABS variants. Both variants are equipped with black-colored levers, footsteps, and pedals. 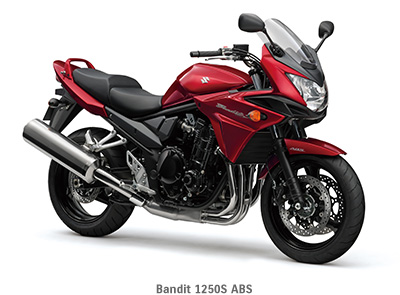 Suzuki’s long-selling large displacement sportbike Bandit 1250S ABS is now equipped with a newly designed half fairing. It has reduced its air resistance by extending the side cowling to the radiator sides.