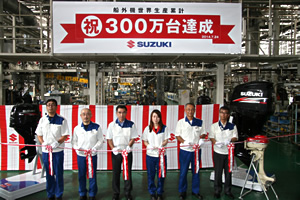 Suzuki Motor Corporation has achieved accumulated global production of three million units for the outboard motors it produces. Suzuki reached this milestone in 49 years after it started producing outboard motors in 1965. To commemorate this achievement, Suzuki has held a ceremony today at its Toyokawa Plant in Aichi Prefecture, Japan. The ceremony was attended by Executive Vice President Toshihiro Suzuki, along with the employees.

Since 1987, when it won the first-ever US National Marine Manufacturers Association (NMMA) Innovation Award with DT200 Exanté, Suzuki outboard motors have won the award seven times in the past, such as with DF60/70 in 1997, DF250 in 2003, DF40A/50A in 2011, and DF300AP in 2012, bringing innovation to the outboard motor technologies. With the high quality and durability backed by these high technologies, along with the lightweight and compact user-friendliness, Suzuki outboard motors are favored by customers not only in Japan but also in 144 countries and regions overseas.

“Three million units that we achieved today is just one of the many steps we are taking. Suzuki will be celebrating 50th anniversary of outboard motor sales in 2015. We kindly ask for your support of Suzuki outboard motors, so that they would be continuously valued and loved by customers,” said Executive Vice President Toshihiro Suzuki at the ceremony.