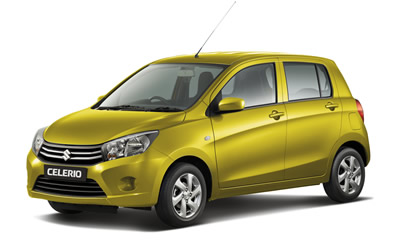 CELERIO is a global compact car that will be marketed based on the concept model A:Wind, which was exhibited at the Thailand International Motor Expo held in November 2013. It has adopted a liberating interior and exterior design to a packaging which has realized roomy interior and luggage capacity despite its compact body, by reviewing the structure and layout of the body.

In addition to the newly-developed five-speed manual transmission with improved maneuverability, it will also be available with CVT equipped with auxiliary gearbox for the Thai market, where automatic transmission is the mainstream. By offering a choice from these two transmission types, and combining with the newly-developed 1.0L engine, it has cleared fuel consumption of 5L/100km, one of the requirements for cars that meet the eco-car project promoted by the Thai government.

Suzuki has started production and distribution of the eco-car SWIFT in SMT from March 2012, and its production in 2013 was approximately 50,000 units. CELERIO will be produced from May 2014 as its second eco-car following the SWIFT. Also, it is planned to start production of European CELERIO which will be launched in the latter half of 2014.