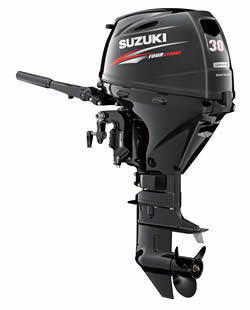 Suzuki has announced the addition of yet another two new lightweight and fuel-efficient outboard motors to its range – the DF30A and DF25A. Both of these new models punch well above their weight in terms of delivering high-end specification and performance from small portable units.

These new models have been eagerly anticipated by many markets of the world and at just 62kg they will be the most lightest in their respective classes. This is a phenomenal achievement considering the level of specification that these new outboards offer boaters.

Both of these outboards are based on a totally new in-line three-cylinder block with a displacement of 490cm3. The engine also benefits from Suzuki’s revolutionary new generation battery-less electronic fuel injection system helping to deliver quicker starts, smoother operation and better acceleration in any conditions.

In addition to the fuel injection system helping to deliver quicker and easier starts, the new DF30A and DF25A also feature a very light recoil starter that requires less pull strength, making them much easier to use.

The battery-less electronic fuel injection system also allows these versatile little engines to benefit from Suzuki’s Lean Burn Fuel Control System. The DF25A is up to 15%*1 more fuel efficient when compared with the current DF25. This intelligent fuel management system predicts fuel needs by monitoring engine performance and operating conditions to deliver a leaner fuel/air mixture to the engine. The result is a remarkable improvement in fuel economy over the outboard’s wide operating rev range. This means that both fuel consumption and emissions are reduced without affecting the superb performance of the engine.

These outstanding engine efficiencies are further enhanced by the introduction of roller rocker arms, an offset crankshaft and direct intake and cover ventilation.

The DF30A and DF25A are the first outboards in their respective classes to utilise a roller with internal bearings on the cam slipper surface for both intake and exhaust valves. The roller changes the contact between the camshaft and rocker arm from a conventional sliding action to a rolling action thus reducing friction in the rocker arm operation.

By positioning the crankshaft slightly off centre of the cylinder, reduces lateral pressure against the cylinder wall as the piston moves up and down. The result is a smoother piston movement, which improves operating efficiency.

These new models also benefit from a newly designed engine cover. However, this is not just for aesthetic purposes as the new cover provides the direct intake system with a smoother, cooler flow of air, which boosts the operating efficiency of the engine. This is made possible by the fact that the rotating flywheel helps vent warm air from the recoil cover, inner air intake and the outside of the engine cover, reducing temperatures in the engine cover. This, together with a newly designed air cleaner, allows much higher power output from a relatively small displacement.

Ease of use and maintenance was always at the forefront of the Suzuki engineers’ minds when it came to designing these new models. So to help protect the engine from the damage caused by salt, sand and dirt that can build up in its cooling system, these new outboards are equipped with an easy to access a freshwater flush port to make flushing the cooling system as easy and convenient as possible.

Not only are these outboards easy to use, but the fact that they are so compact and lightweight means that they are easy to transport and store as well.

These new models will be available in all the popular configurations, to cover the wide variety of boats and installations used by our customers.
Suzuki will start production of these new models early in 2014 with availability in dealerships expected to be in May 2014.