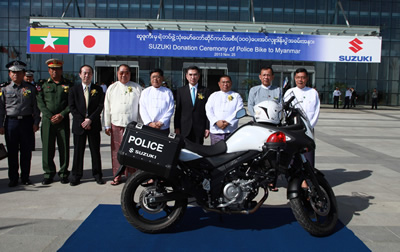 Suzuki Motor Corporation has decided to endow police motorcycles to the Myanmar government, and held a presentation ceremony on 25 November, 2013.

Myanmar will be hosting the Southeast Asian Games (SEA Games) in December, a sports tournament for the Southeast Asian countries, as well as holding a presidency for the ASEAN in 2014. The Myanmar government has requested Suzuki to cooperate for motorcycles to be used during those international events, and Suzuki decided to endow one hundred police motorcycles based on the V-Strom 650 ABS. These motorcycles will be used for the security of important people of the Myanmar government and the ASEAN.

The presentation ceremony was held at the Myanmar International Convention Center located in Naypyidaw, the capital of Myanmar on 25 November, 2013. Attended by the Myanmar government officials, Toshihiro Suzuki, Executive Vice President presented one hundred motorcycles.

Suzuki has started production of automobiles at its subsidiary Suzuki (Myanmar) Motor Co., Ltd. in May 2013. As for motorcycles, small displacement models ranging from 110 to 125cm3 are imported and distributed by the local dealer.