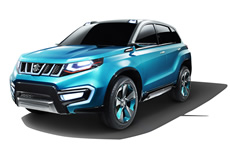 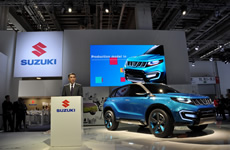 Suzuki Motor Corporation has unveiled compact SUV concept model iV-4 at the Frankfurt Motor Show, which is being held from 10 September, 2013*.

The iV-4 is a compact SUV concept model offered by Suzuki, a manufacturer of compact SUVs such as the Jimny and the Grand Vitara, which have been earning high appraisal.

For more information, please refer to the below press release.

Suzuki is pleased to announce that the world premiere of its new compact SUV concept model, the iV-4, will take place at the 65th IAA Frankfurt Motor Show in September 2013.
Since launching the LJ series in 1970, Suzuki has expanded its SUV line-up with the Vitara in 1988, the Jimny in 1998, and the Grand Vitara in 2005. As a compact SUV pioneer, Suzuki introduces the iV-4, a concept model that embodies a new automotive idea: the personal compact SUV.

Under the "Grab your field" concept, iV-4 is heir to Suzuki’s DNA in sports utility vehicles (SUV). It’s set apart by its powerful exterior design, which taps into the tradition of Suzuki’s compact SUVs. And it’s every bit as tough and rugged as an SUV should be, truly empowering its user to "Grab your field". This concept model is designed to be personalised, so that customers can turn it into a car which is just right for them and their lifestyle. “i” stands for “individuality”, “V” for “vehicle”, and “4” for “4 wheel-drive”.

Dimensions of the iV4

The production model based on the iV-4 aims to be an SUV for the present day: light in weight and boasting among the lowest CO2 emissions in its class. And besides being eco-friendly, the four-wheel drive model will come equipped with ALLGRIP, the next generation of 4WD technology, in order to deliver the powerful drive the user expect of an SUV. It will thus offer a combination of design and off-road performance that goes beyond a typical city SUV.

Suzuki will start launching the production model, based on this iV-4 concept model, at Magyar Suzuki in 2015 and will be releasing it in Europe.

Suzuki history on the SUV market

Suzuki is the pioneer of the compact SUV. Since launching the LJ in 1970 and the SJ series in the 1980s, the company has put a great deal of effort into developing off-road models such as the Vitara, the Jimny and the Grand Vitara.

Back in 1970, the off-road market was dominated by vehicles with huge engines, but Suzuki challenged them with a mini car that delivered the ultimate in off-road performance by combining a high reduction ratio with a lightweight body. Weighing in at just 600 kilograms, it achieved a gradeability of 27.5 degrees – and then evolved steadily. Tolerance during continuous high-load off-road driving was boosted by replacing the air-cooled engine with a water-cooled engine for enhanced cooling performance. Engine displacement was increased. The treads were broadened.

With the launch of the SJ series, which with its elegant straight lines heralded the arrival of the stylish-looking four-wheel drive model, Suzuki also succeeded in winning over female drivers.

In 1988 the Vitara came out, combining a sturdy ladder frame with a classy-looking European-style body characterised by straight lines. It manoeuvred beautifully thanks to its elegantly simple suspension with struts at the front and a centre wishbone at the back.
Then, in 1998, a complete overhaul was made of the LJ and SJ series to create a more modern look – and the Jimny was born. It was a truly revolutionary model, featuring a longer wheelbase and a redesigned ladder frame, and incorporating an air locking hub for the first time.

The Jimny continues to sell well even today, years later, thanks to its many devoted fans ranging from female city dwellers to hunting aficionados.

The Vitara, for its part, was reincarnated as the Grand Vitara, the harbinger of the coming crossover era, which offered great on-road performance without sacrificing off-road capability.

In 2005 the Grand Vitara underwent a full model change. The performance of the suspension was maximised by using a built-in ladder frame, and both on- and off-road capabilities were boosted. In addition, a four-wheel drive system with four modes was adopted from this model.

Suzuki’s SUV expertise, developed through long years of tradition in the field, has been harnessed in our crossover models as well. It has ensured the success of the SX4 and is evident everywhere in the new SX4 S-CROSS, which is about to go on sale.
And when the production model based on the iV-4 comes out in the near future, Suzuki will be introducing completely new possibilities into the SUV segment.