Suzuki SX-4 S-CROSS rolls off the line in Hungary 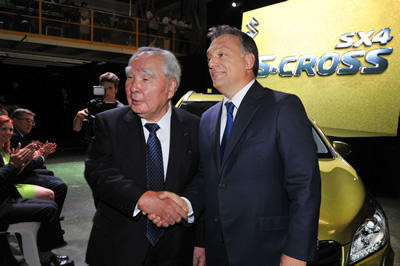 Suzuki Motor Corporation has held a ceremony for the brand new C-segment crossover SX4 S-CROSS as it rolled off the production line of Suzuki’s Hungarian subsidiary, Magyar Suzuki Corporation Ltd.

Suzuki’s first C-segment crossover SX4 S-CROSS is a model which achieves a remarkable combination of styling, utility, performance and fuel economy. It is a model which can offer great driving enjoyment and versatile family usage for even more people in an even wider range of situations.

The initial production and sales volume is planned to be 100,000 units for the first year. From this autumn, SX4 S-CROSS is planned to be supplied not only throughout Europe including Hungary, but will also be exported to markets including Oceania, Asia, the Middle East and Latin America as a world strategic model.

*Based on Suzuki’s internal research.