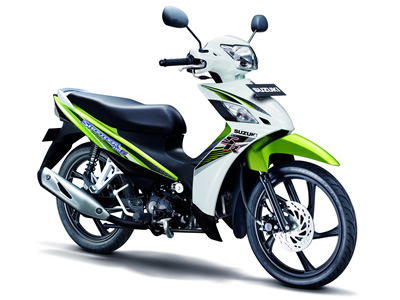 SHOOTER has an excellent fuel mileage improved by approximately 30% compared to the same type of model in Suzuki’s 110cm3 class. This was achieved by developing an all-new 113cm3 engine based on extensive research on the use condition of Indonesia and adopting a fuel injection, its first use in its class*. The engine has reduced friction loss by adopting parts such as the lighter piston and the smaller crankshaft, as well as improved combustion efficiency by reviewing the intake and the exhaust system. As a result, in addition to improved fuel mileage, it has achieved improved output character.

Also, it has realized high performance due to the lighter chassis based on the concept of easier handling, while maintaining high strength. In addition, it has improved its usability by adopting useful equipments such as the under seat storage space and the larger headlight.

By launching SHOOTER to the class for the entry users, Suzuki will seek to expand its lineup and sales.