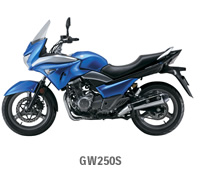 Suzuki Motor Corporation has made the following announcements at the 15th Shanghai International Automobile Industry Exhibition which is being held from 20 April, 2013* in Shanghai, China.

Suzuki plans to produce and distribute the production model based on “AUTHENTICS” by the end of 2014 at its joint venture in China, Chongqing Changan Suzuki Automobile Co., LTD.
Also, by distributing the “SX4 S-CROSS” (Chinese spec), which will be produced from the end of 2013 at the same joint venture, Suzuki will seek to expand its shares in China.

Suzuki has made world premiere of the new “GW250S”, a model that has equipped a half-fairing on the on-road motorcycle “GW250”, which is being produced by Suzuki’s joint venture in China, Changzhou Haojue Suzuki Motorcycle Co., LTD., and favored not only in China but also in Japan, Europe, etc.
By equipping a half-fairing, it gives a sportier image while increasing wind protection such as when riding on highways. Also with the higher handlebar, it realizes a more comfortable riding position.
Suzuki will launch the “GW250S” in China, and plans to distribute them in the overseas market.