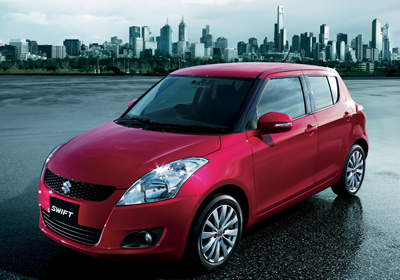 Suzuki Motor Corporation is pleased to announce that cumulative worldwide sales of Suzuki’s compact car Swift, which was launched as a world strategic model in 2004, reached three million units in January this year (eight years and two months since the start of sales in 2004).

The Swift reflects Suzuki’s expertise in compact cars and dedication to creating models that are sporty, stylish, and fun to drive. It was first produced and sold in Japan as a world strategic model in November 2004. In the following year, production and distribution began in countries including Hungary, India, and China. In March 2012, production and distribution also began in Thailand. Today, the Swift is favored in more than 120 countries and regions around the world to reach three million units of cumulative worldwide sales.

In Japan, the Swift has won the RJC (Automotive Researchers’ and Journalists’ Conference of Japan) Car of the Year in 2006 and 2011, and the 2005-2006 Japan Car of the Year Special Award ‘Most Fun’ prize, as well as various car of the year awards in Europe, India and countries worldwide, showing how the Swift is well regarded.

In the full model change of 2010, the Swift, as a new standard compact car, has evolved everything such as by adopting a sophisticated design that gives free and stable image, refining the ‘brisk driving’ feature of the Swift, and also improving the environmental performance.