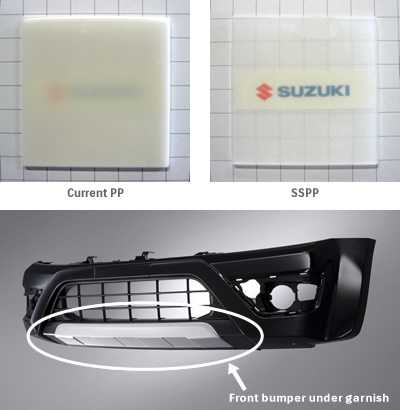 Suzuki Motor Corporation has developed polypropylene (PP) resin material which is approximately 10% lighter than the current PP and excellent in material coloring, called the Suzuki Super Polypropylene (SSPP)*1, and has adopted them on the front bumper under garnish of the Escudo which was launched in Japan on 11 July, 2012.

In the recent years, the need for weight reduction of automobile’s resin part is increasing, and there is a high demand for reduction of environmental load substance. For these reasons, material coloring of parts is carried forward, in which the colored resin, pre-mixed with colorant and bright coloring before molding, is used without painting.
In order to satisfy both rigidity and impact resistance, the mainstream of the current resin material of automobile’s PP adds rubber and inorganic filler material such as talc*2 to its base PP resin. The talc was the main factor of increasing weight and color-dulling due to degradation of transparency.

SSPP can be characterized by its satisfaction of rigidity and impact resistance by adding only styrene series thermoplastic elastomer*3 to the high rigidity base PP resin without adding talc. Compared to the current PP, flexural rigidity is at the same level while keeping weight due to talc-free base PP resin. When compared with the parts of the same size, it can be lighter by approximately 10%. And by the heightening of material transparency, it can have excellent material coloring.

The front bumper under garnish equipped to the Escudo has adopted SSPP on market models for the first time in the world*4. It realizes high brightness silver metallic color without painting due to the high colorability of SSPP. Because it has no paint layer, in case of scratches such as stone chips, it is difficult to distinguish a scratch. It can also reduce environmental load because it does not emit volatile organic compounds (VOCs).
SSPP is a new technology in which a patent has been applied for, and Suzuki will expand the usage of SSPP to the interior parts and exterior parts such as bumpers in the future.