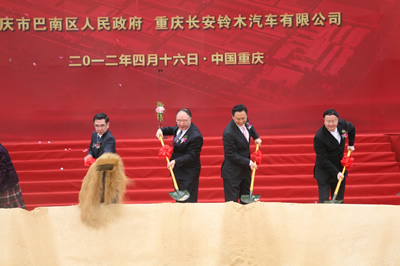 Suzuki jointly established Changan Suzuki with Changan Automobile Co., Ltd. in 1993. Ever since the beginning of production of the Alto in May 1995, Changan Suzuki has been producing and distributing unique vehicles that are appreciated by the Chinese customers, such as Cultus, Swift, and SX4 for 19 years.

The groundbreaking ceremony welcomed guests such as Huang Qifan, Mayor of Chongqing, Tong Xiaoping, Vice Mayor of Chongqing, and Chiharu Tsuruoka, Principal Officer of the Consulate-General of Japan at Chongqing. The ceremony was also attended by Xu Liuping, Chairman of the Changan Automobile, Zhang Baolin, President of the Changan Automobile, Toshihiro Suzuki, Executive Vice President of the Suzuki Motor Corporation, and Changan Suzuki dealers.

Overview of the second plant