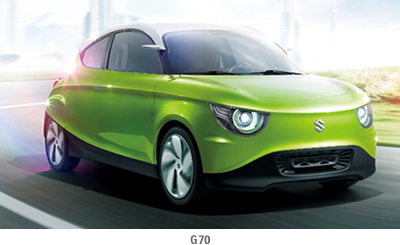 Suzuki is showcasing the G70 at the 2012 Geneva Motor Show. This model made its debut at the 2011 Tokyo Motor Show as the REGINA, and it now wears a G70 badge which originates from a nickname adopted during the development process. While the goal of reducing CO2 emissions is an absolute must throughout automotive development, Suzuki also believes that A-segment models should always be totally customer-responsive. With this in mind, the company has been focused on developing an A-segment car with CO2 emissions no higher than 70g/km for market launch in the near future, featuring – as the name suggests – the G70’s environmental technologies.

Although the G70 is a petrol model, its fuel economy and emissions are on a par with those of a hybrid, thanks to its weight of just 730kg and a drag coefficient more than 10% lower than that of a Suzuki A-segment production model. It also features a direct-injection turbo petrol engine and an Engine Auto Stop Start system with regenerative braking. All in all, the G70's CO2 emissions do not exceed 70g/km*. 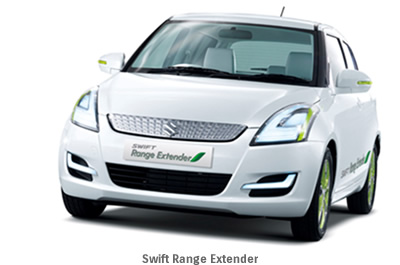 A concept model for the Range Extender (currently being developed) based on the Swift is being showcased for the first time in Europe. Since exhibiting the Swift Plug-in Hybrid based on the previous Swift at the 2010 Geneva Motor Show and beginning fleet tests in Europe and Japan the same year, Suzuki has elaborated and advanced the system.

Suzuki has developed the Swift Range Extender independently as a next-generation car with environmental benefits in order to meet both present and future transportation requirements. Designed primarily for day-to-day tasks such as shopping and transporting passengers, it can cover about 30km*2 (JC08 mode) on a complete battery charge. With an engine-driven generator starting to charge the battery when it runs low, the driver can make longer journeys without worrying about a flat battery.

Since the Alto debuted in 2009, its combination of low CO2 emissions (initially 103g/km), refined styling, user friendliness and affordability have made it so popular that sales in Europe had topped 131,000 units by the end of 2011. In the light of new CO2 regulations in the European Union and Switzerland, Suzuki enhanced the Alto for even lower CO2 emissions (99g/km) in 2011 by adopting intake and exhaust variable valve timing. The enhanced Alto carries forward the established, popular exterior design and has a classier interior trim.