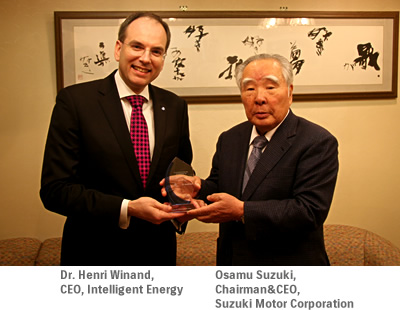 Suzuki and IE have been developing fuel cell vehicles such as by exhibiting co-developed motorcycles equipped with air-cooled fuel cell system at the 2007, 2009 and 2011 Tokyo Motor Show, and earning Whole Vehicle Type Approval (WVTA)* in March 2011 for Burgman Fuel Cell Scooter, the world’s first fuel cell vehicle to earn it.

In order to officially develop and manufacture one of the next generation environmental vehicles, a motorcycle and an automobile equipped with fuel cell systems, Suzuki will establish a joint venture company, SMILE FC, in February 2012, for developing and manufacturing fuel cell system with IEH, and will speed-up to commercialize a product by combining the fuel cell development technology of IE, and control and mass-production technologies of Suzuki.

Beginning with the air-cooled fuel cell system, which can be characterized with its lightness, compactness, and potential for cost reduction, Suzuki and IE, with SMILE FC at the core, will work on developing mass-production technology and manufacturing of fuel cells, as well as exploiting the global supply chain of fuel cell parts, and familiarizing the fuel cell vehicles.

Overview of the joint venture company