Suzuki decides to construct a new automobile plant in Vietnam

Vietnam Suzuki Corp., the automobile and motorcycle manufacturing and sales subsidiary of Suzuki Motor Corporation in Vietnam, has decided to construct a new automobile plant in Dong Nai Province in southern Vietnam.

Vietnam Suzuki Corp. had been producing motorcycles and automobiles in Binh Da in Dong Nai Province since 1996, but the production of motorcycles had moved to the new plant in neighboring Long Binh Techo Park in 2006. In order to meet the Vietnamese automobile market in the near future, Vietnam Suzuki Corp. has decided to move the production of automobiles into a new plant which will be constructed in the site neighboring to the new motorcycle plant in Long Binh Techo Park.

The investment for building the new plant is approximately 1 billion yen, and it is scheduled to start its production in 2013. The annual production ability for the first year is 5,000 units, and is planned to be expanded thereafter. 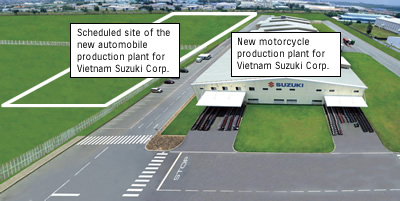