The Suzuki booth at the 2011 Tokyo Motor Show* will feature automobiles and motorcycles that highlight Suzuki’s uncompromising focus on meeting contemporary needs, offering new kinds of value, and delivering genuine pleasure to customers.

In line with Suzuki’s unparalleled expertise in small cars, the theme of Suzuki’s booth will be “small cars for a big future”. Suzuki cars for today, the near future, and the more distant future will highlight the fuel economy, user-friendliness, innovation, brisk performance, and exciting styling that are possible within smaller dimensions - and the huge possibilities that small cars will realize in years to come.

REGINA: a vision of a next-generation global compact car with excellent fuel efficiency and low emissions thanks to lightness and superior aerodynamics 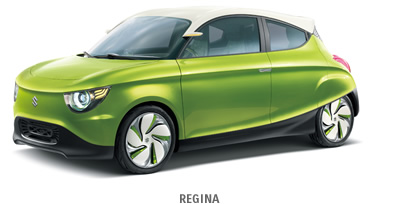 The REGINA embodies Suzuki’s vision of a next-generation global compact car. It’s as light as a minicar (just 730kg) thanks to a clear focus on minimizing weight, and it has a drag coefficient at least 10% lower than that of current models thanks to uncompromising efforts to heighten aerodynamic performance. As a result, it has fuel economy of at least 32km/L (measured in the JC08 test cycle) and CO2 emissions as low as 70g/km (measured in the New European Driving Cycle) using a petrol engine.

The Q-concept is an entirely new kind of mobility — one that’s positioned between conventional motorcycles and cars. With a 2.5-metre overall length and two seats in tandem configuration, it’s ideal for everyday journeys within a radius of about 10km.

The Q-concept is more practical than a car as it’s more manoeuvrable and takes up much less parking space. At the same time, a cabin makes it a more attractive, more comfortable option than a motorcycle. It’s outstandingly handy for shopping, commuting, going to the doctor, transporting children, and all the other short journeys in everyday life.

Other Q-concept configurations are possible. For instance, the Q-concept can have a single seat for a parent at the front and a two-person child seat at the rear, or it can be configured as a delivery vehicle with a single seat at the front and a cargo area at the rear. So it offers new possibilities for people who live in towns where businesses, schools, hospitals and other essential facilities are all in relatively compact areas. 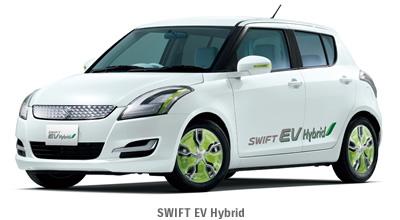 The Swift EV Hybrid is Suzuki’s vision of an ecocar that embodies advances on the Swift Range Extender.

A compact vehicle such as the Suzuki Swift is typically driven 20−30km per day in Japan. The Swift EV Hybrid can cover such distances on battery power alone. And it can extend its range using an engine-driven generator.

The Swift EV Hybrid is scheduled to be exhibited as the Swift Range Extender at motor shows in some countries.

<The following model will be officially announced in late November>
New Swift Sport: the performance flagship of the Swift series 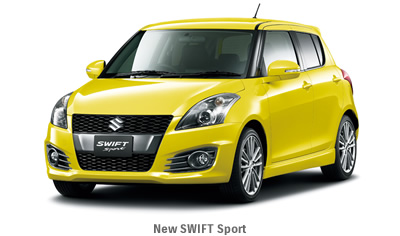 The new Swift Sport is based on the new Swift (a model that offers significantly better performance than its predecessor). Reflecting a concept of creating a refined sport compact, it has an even-higher-powered engine, new transmissions (six-speed manual and continuously variable), and stiffer suspension, which together deliver even better performance and even greater driving enjoyment.

As well as offering higher performance, the new Swift Sport represents a significant evolution in terms of fuel economy, comfort, and quietness.

The e-Let’s is an electric scooter that combines zero-emission environmental performance with the practicality needed for everyday shopping and commuting.

The e-Let’s has a high-performance in-wheel motor with regenerative braking capability; a lithium-ion battery; and a charging system within a compact, lightweight chassis. It weighs no more than a petrol-engine model. Also, it offers the smooth acceleration, nimble performance, low noise, low vibration, and zero-emission environmental performance that characterize electric scooters.

The battery is charged from a 100V household outlet. A single charge gives a range of about 30km (assuming the e-Let’s is ridden at 30km/h on level roads).

The e-Let’s was granted a number plate in September 2010. Suzuki has since been conducting on-road trials by itself and as part of an initiative led by its home city, Hamamatsu. Suzuki will use the resulting data to verify the reliability of the e-Let’s and move further toward production. 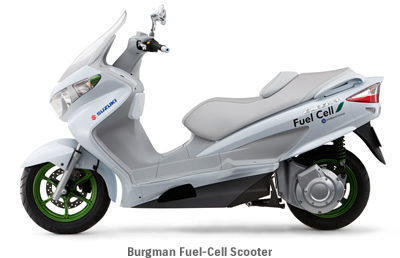 The Burgman Fuel-Cell Scooter debuted at the 2009 Tokyo Motor Show. It has since been subjected to on-road trials in the United Kingdom and Japan and has become the first fuel-cell vehicle of any kind to earn Whole Vehicle Type Approval in the European Union. Its appearance at the 2011 Tokyo Motor Show will highlight its continuing evolution. 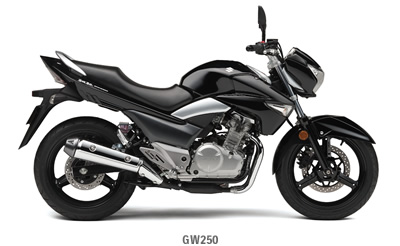 The GW250 is a 250cm3 road bike that Suzuki developed to be its flagship model in China, where more and more people are getting enthusiastic about motorcycles as the economy continues to grow. It debuted at this year’s China International Motorcycle Trade Exhibition in the city of Chongqing.

The GW250 is produced in China. 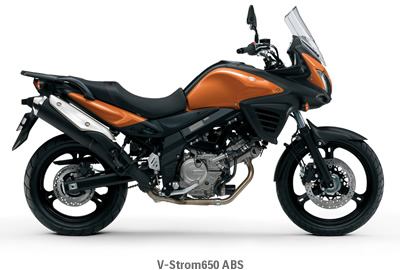 The versatile V-Strom 650 ABS makes every ride enjoyable whether it’s a day-to-day run across town or a long-distance tour.

When the original V-Strom 650 debuted in 2003, it earned worldwide acclaim for its versatile sport-enduro-tourer characteristics. The latest model change made the V-Strom 650 ABS even more comfortable through improvements to performance at low and mid-range engine speeds and adoption of new styling that gives better wind protection. Environmental performance is also improved by enhancing the fuel efficiency. 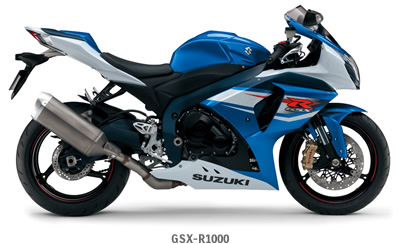 In line with the GSX-R1000’s “Own The Racetrack” slogan, the latest GSX-R1000 delivers enhanced running, cornering, and stopping performance together with improved fuel economy.