The new generation of the Suzuki Swift Sport will make its world debut at the 64th International Motor Show (IAA) Cars show, which will be held in Frankfurt, Germany, from 13 to 25 September 2011*1. 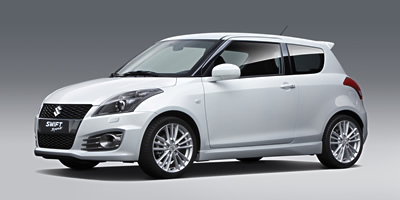 The new Swift Sport is a refined sport compact resulting from the first full model change since the launch of the original Swift Sport in 2006. It has a more aggressive and dignified exterior look thanks to a ground-hugging form that gives a sense of stability and tension and a big front grille that evokes sporty performance. And its cabin combines essential sportiness with a high-quality look and feel and design features that heighten excitement about the driving experience.

Higher power and lower fuel consumption are delivered by the 1.6-litre M16A engine, which Suzuki developed exclusively for the Swift Sport. The engine is mated to a specially developed six-speed manual transmission, resulting in performance that’s both exciting and environmentally responsible. Plus, the new Swift Sport offers superior cornering stability and brisker, more responsive handling thanks to struts with internal rebound springs and to an exclusive rear-suspension design.

High levels of safety are assured by features such as a light, stiff, impact-absorbing body; seven airbags (including curtain airbags and a driver’s knee airbag); and an ESP® (Electronic Stability Program).

Note: ESP is a registered trademark of Daimler AG.

*2 The data are provisional pending the results of homologation procedures.