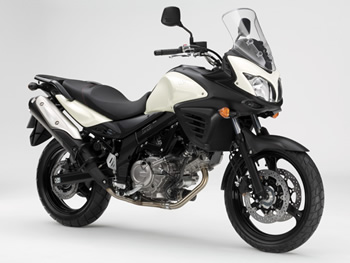 Suzuki Motor Corporation will launch Sports Enduro Tourer, the new “V-Strom 650 ABS” that’s capable of enjoying from daily street riding to long-distance touring, from July in Europe. It is scheduled to expand its sales to North America and Oceania as well.

Ever since its launch in 2003, “V-Strom 650” has been favored in Europe and North America as “Sport Enduro Tourer”, a motorcycle that’s enjoyable from street riding to long-distance touring. By adopting high wind protection performance suited for highway riding, a comfortable seat and an upright position, and an easy-to-handle V-Twin engine, it is capable of meeting various motorcycle lifestyles.

The full-model change this time was realized by renewing it into a firm, sporty design, upgrading the front cowlings and windscreen to enhance the comfortableness in touring, and adding functions such as the gear position indicator to the instrument panel. The engine has been refined to make it easy to handle in the low-to-mid rpm range.