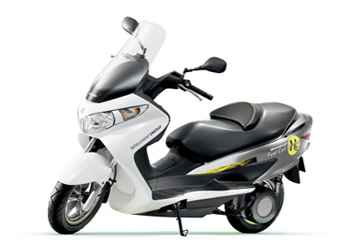 Suzuki Motor Corporation is pleased to announce that the Burgman Fuel-Cell Scooter has become the world’s first fuel-cell vehicle to earn Whole Vehicle Type Approval1 in the European Union.

The Burgman Fuel-Cell Scooter is based on Suzuki’s city-friendly Burgman. It incorporates a light, compact, air-cooled fuel cell and a hydrogen tank that’s positioned inside the frame. Electricity produced by the fuel cell powers a motor for propulsion; the only emission is water. Suzuki is working toward commercializing the Burgman Fuel-Cell Scooter as a motorcycle with superior environmental performance. Suzuki aims to make eco-friendly fuel-cell scooters increasingly common in Europe in line with the establishment of hydrogen filling stations and other necessary infrastructure.