Suzuki Motor Corporation has unveiled three new overseas motorcycle models for 2011 at the Intermot motorcycle, scooter, and bicycle fair, which is being held in Cologne, Germany, from 5 to 10 October. The three new models each offer improved performance together with an improvement of at least 10%* in fuel economy.

GSR750: a new naked machine with futuristic styling and a powerful engine

The GSR750 is a new kind of naked machine: one that combines edgy, futuristic styling with great performance on urban streets. It’s outstandingly rider-friendly thanks to atomizing injectors and other cutting-edge technologies that make it at least 10%* more fuel-efficient than the 2010 GSR600 and realize smooth, strong torque delivery in the low-to-mid rpm range. Plus, it has inverted front forks, a multi-function instrument cluster, a uniquely shaped headlight, and a triangle-shaped muffler that combine radical looks with great functionality.

GSX-R750: the best-balanced 750cc Supersport in the world 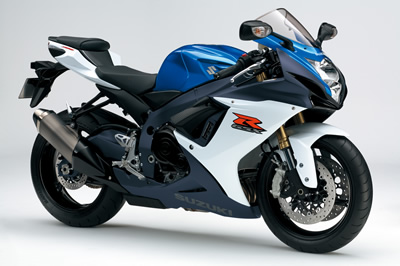 Reflecting the GSX-R concept of always being The Top Performer, the new GSX-R750 is 8kg lighter than its predecessor in the chassis and other areas and as compact as a 600cc machine; its lightness and compactness translate into better performance. The chassis incorporates a newly designed frame, a Big Piston Front-fork, and Brembo monoblock front brake calipers. The engine is at least 10%* more fuel-efficient than that of the 2010 GSX-R750 thanks to cutting-edge design techniques that yielded lower mechanical losses. Plus, compact bodywork reflects the pursuit of lightness. 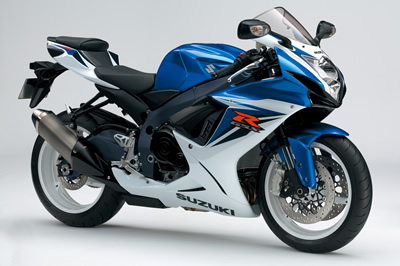 Suzuki has evolved its 600cc Supersport once more. The new GSX-R600 has a newly designed frame, a Big Piston Front-fork, and Brembo monoblock front brake calipers. Plus, its engine has lower mechanical losses thanks to advanced component-design techniques originally used with MotoGP machines; output is higher at high engine speeds, and torque is higher in the low-to-mid rpm range. The engine improvements are complemented by revised transmission gear ratios, resulting in better acceleration and an improvement of at least 10%* in fuel economy over the 2010 model.

*Measured by Suzuki in the Worldwide Motorcycle Test Cycle