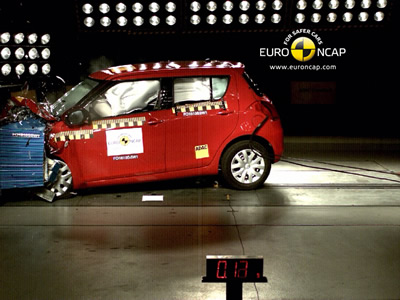 The new Suzuki Swift is due to go on sale in European countries this September. On 25 August, the European New Car Assessment Programme (Euro NCAP) announced that it had given the Europe-specification new Swift a five-star rating (the highest possible) for crash safety.

Euro NCAP is an independent car safety assessment programme backed by seven European Governments, the European Comission and motoring and consumer organizations in every EU country. Under the assessment regime that it adopted in February 2009, Euro NCAP gives each car tested an overall rating as a number of stars from one to five. The overall rating reflects scores in four categories: adult protection, child protection, pedestrian protection, and safety assist.

The new Suzuki Swift offers increased occupant protection since it has seven airbags (including a newly adopted knee airbag) as standard equipment; a lightweight, impact-absorbing body; and front seats that reduce the risk of whiplash in the event of a rear impact. It also offers increased pedestrian protection and incorporates active-safety technologies such as an Electronic Stability Program. High performance in all four Euro NCAP test categories led to the five-star rating.