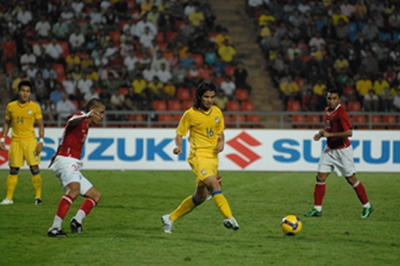 Suzuki Motor Corporation is pleased to announce its renewed support for the ASEAN Football Federation (AFF) Cup as the tournament’s title sponsor. Suzuki was title sponsor for the first time in 2008.

The AFF Suzuki Cup is the biggest football tournament in the ASEAN region since 1996. Aimed at raising the standard of ASEAN football to a world-class level and at making football more popular in the region, it will decide the top footballing nation among the AFF’s 11 members: Brunei, Cambodia, Indonesia, Laos, Malaysia, Myanmar, the Philippines, Singapore, Thailand, Vietnam, and Timor-Leste.

The Official Draw will be held in Vietnam on 15 September when the groupings will be determined. Qualifying rounds for the AFF Suzuki Cup 2010 will be held from 22 to 30 October in Laos. The finals will be played from 1 to 29 December in Vietnam, Indonesia, and other ASEAN countries.

Through support for sporting events embodying the same excitement and passion for life that are communicated by Suzuki’s global “Way of Life!” slogan, Suzuki aims to heighten its brand awareness and convey its passion for making great vehicles to sport fans around the world.

Suzuki will help distributors in ASEAN countries make effective use of the tournament in their sales-promotion activities.