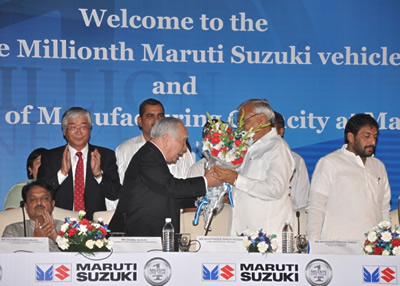 Suzuki Motor Corporation’s Indian subsidiary, Maruti Suzuki, has held a ceremony at its Manesar plant in the state of Haryana to celebrate production of one million cars in the fiscal year through March 2010.

Osamu Suzuki commented: “Maruti Suzuki is Suzuki Motor Corporation’s biggest subsidiary, and its production has reached a volume comparable with that of our operations in Japan. The Indian market can be expected to continue growing, so Suzuki Motor Corporation will make every effort to enable Maruti Suzuki to offer cars with even higher quality at affordable prices. Competition in India is going to intensify, so we look to our partners here to work with us and support us more closely than ever.”

Maruti Suzuki also looks set to top one million units in terms of overall sales (sales in India and exports) this fiscal year.